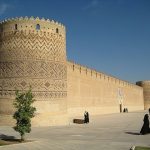 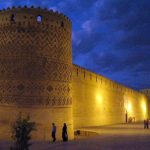 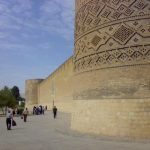 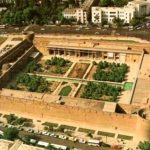 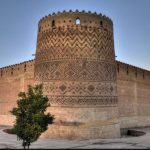 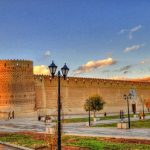 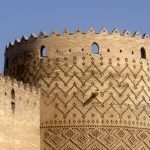 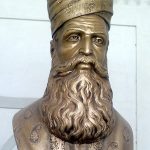 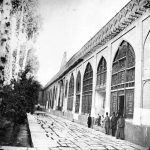 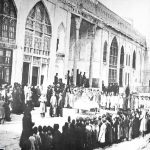 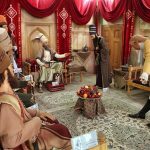 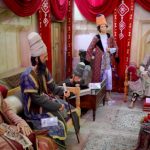 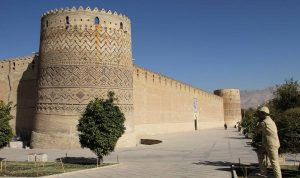 Architecturally the Arg is a large and lofty, rectangular building, originally surrounded by a moat said to be as broad and deep as the moat on the edge of the city. At each of the four corners are round towers in the form of truncated cones; these are 15 m high. The building measures 124.8 m (120 gaz) from east to west and 93.6m (90 gaz) from north to south (1 gaz of Shiraz = 104 centimeters). The outer walls are 12 m high, and the only entrance is in the middle of the east wall, behind which are corridors, guardrooms, and the ḥammām (bath). The rectangular courtyard inside measures 93.6 m by 72.8 m (90 x 70 gaz); it contains two pools and a garden. In the middle of the north, west, and south sides of the courtyard are three big ayvāns, each fronted by two tall stone pillars. Flanking each ayvān are halls, large three-doored rooms, and stairways leading to small rooms and ayvāns on the floor above. At each of the four corners of the citadel there is a small private yard giving access to the adjacent fortifications and rooms. 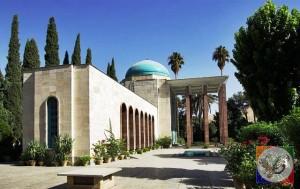 The Arg has foundations, lower walls, pillars, and pavements of stone; the rest of the structure is baked brick, with wooden doors and rafters. The bases of the outer walls and towers are faced with rough-hewn square stones (bādbor-e šīrāzī), while the upper portions of them are faced with interlaced brick ornamentation (heštogīr-e šīrāzī). Above the entrance on the east wall, a battle scene in seven-color glazed tile depicts Rostam in combat with the white demon.

The interior decoration once included marble from Yazd and Marāḡa on the lower parts of the walls of the ayvāns and halls and Shirazi-style patterns painted in gilt and lapis lazuli on the plastered surfaces of the upper parts and the ceilings. The lower parts of the courtyard were adorned with large carved stone panels, and throughout the building there were ornamental wooden skirting boards beneath the marble panels.

According to Mīrzā Moḥammad Ṣādeq Mūsawī Nāmī of Isfahan, Karīm Khan had the waters of Āb-e Roknābād (the stream in the outskirts made famous by Ḥāfeẓ) brought into the Arg in strong brick-lined and mortared conduits and stone siphons passing under the riverbed and moat on the edge of the city and under the Arg’s own moat (Tārīḵ-egītīgošāy, ed. S. Nafīsī, Tehran, 1317 Š./1938, pp. 159-60). Remnants of the siphons and conduits can still be seen in the vicinity of the Arg. Mīrzā Moḥammad Ṣādeq states that Karīm Khan, not wishing to live in an abode built by men of the past, had this castle erected on the best site in the city and assembled architects, bricklayers, carpenters, masons, painters, tunnelers, and other craftsmen from all parts of the country to do the work. Luxury materials such as marble panels from Yazd and Tabrīz and large mirrors from the lands of the Russians, Ottoman Turks, and Europe were imported and installed. Returning to their home towns in the winter, the masters and craftsmen resumed the work in the spring of 1180/1766-67; following Mīrzā Moḥammad Ṣādeq, the construction of the Arg must have begun in 1179/1766 (Tārīḵ-egītīgošāy, pp. 156-69).

The Arg was the residence of successive Zand rulers, and its towers were sometimes used as prisons. In the Qajar period and the early years of Pahlavi rule it was the seat of the governors general of Fārs. In 1319/1901 a hut was built on the site of the long pool in the courtyard by order of the governor general Malek Manṣūr Mīrzā Šoʿāʿ-al-salṭana. After the erection of the modern governor general’s office (ostāndārī), a building was erected on its eastern edge and used as the city’s police headquarters and prison. Restoration of the monument was begun in 1356 Š./1977, and some of the painted panels and colored windows were restituted.